Yesterday, one of my good friends told me the story of how their little dog came to join their family. I was sitting on a stool at her kitchen island. It was loaded with burgers, hotdogs, pickles, watermelon, and mac and cheese. My daughter’s and I were there to celebrate the Fourth of July with them. Which meant we were there to eat. Which has become quite confusing, this eating. This same friend and I just joined a weight-loss program and while eating cans of beans or pounds of chicken and beef is no problem, a 100-calorie sliver of dark chocolate is the points equivalent of an entire meal. This makes zero sense.

I studied the burgers in front of me, which one, which one…giving them as much  consideration as I would a new car purchase while Herschel Walker, the family’s dog, wandered around the kitchen, working hard for someone, anyone to give him food.

Herschel is a curly, cocoa-brown miniature poodle who is quite full of personality and anxiety. He’s a prancy little thing and had no shame doing tricks for a piece of hot dog. If you want to see intent and desire in its most pure form, observe a dog in the throes of inbound food. They will mashup their entire repertoire of tricks, combining sitting, laying, and rolling over into a single, ridiculous motion.

Now that Herschel’s come around and will let me pet him (it’s the anxiety, y’all), I needed to know his story. “How old is Herschel?” I ask.

They can’t recall for sure. “Maybe eight, probably nine,” my friend, Denise said.
“Is he a full-bred poodle?” I wanted to know.
“He is but when we picked him up, the breeder offered an unsolicited $100 discount, so there’s a little don’t ask, don’t tell on that front,” she said, smiling.
“When did you get him?” I asked.
A big sigh. “It’s a sad story. Do you really want to know?” she asks.
“Of course,” I replied.
“Well before Herschel, we had a small dog, a toy poodle, named Kelsey. She was so tiny, I could carry her in my purse,” she said. (This information surprises and amuses me, my friend doesn’t seem like the dog-in-the-purse type.)

She went on, explaining how on this one particular evening, her husband left to pick up Chinese carryout. As the door shut and she heard him pull away, she realized she hadn’t yelled after him as she had a thousand times before to watch for the dog. “I figured I didn’t need to,” she said. Steve, her husband, had joined us in the kitchen and looked aghast when he realized the story he had walked into.

“Oh my god, don’t tell that story. Why are you telling that?” he asked his wife. I felt awful for him. For them both, because yes, it ended how I didn’t want it to end; how no one, including the dog, wanted it to end. The little dog had run out the door and ran after the car. Steve had looked behind him, but the dog was the size of an actual tea cup and he just didn’t see her when he backed out of the drive.

I hate hate hate stories like this. Not about dogs dying, well, of course about dogs dying, but I hate it when I hear possible proof that the unwanted monkey on my back of near-neurotic worry is there because it needs to be.  END_OF_DOCUMENT_TOKEN_TO_BE_REPLACED

Letters. When I dared open the wooden box, I found letters from my mother. Lots of them. Some handwritten on heavy paper, some typed on tissue-paper onion skin. Letters she had sent to her parents. My grandparents. Her salutation was always the same, ‘Dearest Mother and Dale.’

In them, my mother referred to me as ‘S.’
She wrote to her mother about me sitting on her lap in church and trying to keep me quiet with books. But I had wanted her to read to me that instant, so that, ‘put an end to that.’

She told my grandmother Marg, how she had finally gotten around to hemming my slip so it wouldn’t show under the dress with the white collar and sleeves that my cousin Margo had handed down to me.

How I had worn the red velvet cape and looked darling.

That the blazer she was sewing my brother was coming along. A friend had helped her match up the plaids and, ‘thank goodness, because the pattern was in 15 pieces.’ (If I put her words in quotation marks, that brings her a little closer to me. They are her exact words. Punctuation makes her real.)

She told them that, if the little blazer looked good when she was finished, she would make a big one, for my father. There was a small piece of the blue corduroy left. ‘Is corduroy vulgar for Easter?’ she wanted to know.

On a Sunday to keep her sanity during all the ball games, with needle and thread, she hemmed the curtains so the heat would blow properly through the vents.

She reported that she and her best friend, Betty Sue, each drank a Singapore Sling on New Year’s Eve. My dad ordered a ‘Naked Lady,’ because he thought it was a funny name. She wrote that it tasted disgusting but the steak and lobster were divine.

She wrote to her mother that, ‘S loves tangelos and enjoys peeling them all by herself which she is doing at the sink right now.’ She said that S (that’s me, she was talking about ME) did not like the ‘nuts’ inside the fruit.

The tenses are confusing: Past, present. The memories are frustrating. Real, imagined? That I can’t touch her hand. That I can’t ask anyone. There is no one left to ask. There hasn’t been for years.

I found the newspaper clipping of their obituaries among the letters. Someone, who knows who, had taped the pieces together. Time marked the place where the adhesive, now yellowed and brittle like a chronic smokers’ teeth, met the paper. Her summary appeared first, my brother’s brief facts followed. One beside the other, just like their gravestones under the magnolia tree.

She died on a Saturday. He died the following day, the lord’s day. My father and I appeared, respectively, in both their obituaries as survivors: ‘Husband, daughter; father, sister.’ Their funerals were on Tuesday at 2 pm with ‘cremations to follow.’ I was in the hospital still and unable to attend. Probably best for us all. She was 39. He was 11.

On the outside of the box, on the lid, there’s a ship. Burnt there, like scrimshaw on wood. On the inside, there’s a small, paper Santa nailed to the lid. It looks like it was cut from wrapping paper. Her name is there – Janet Lamb – written in blue ink in the space between Santa’s black boots. 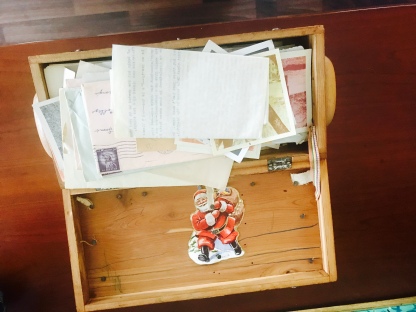